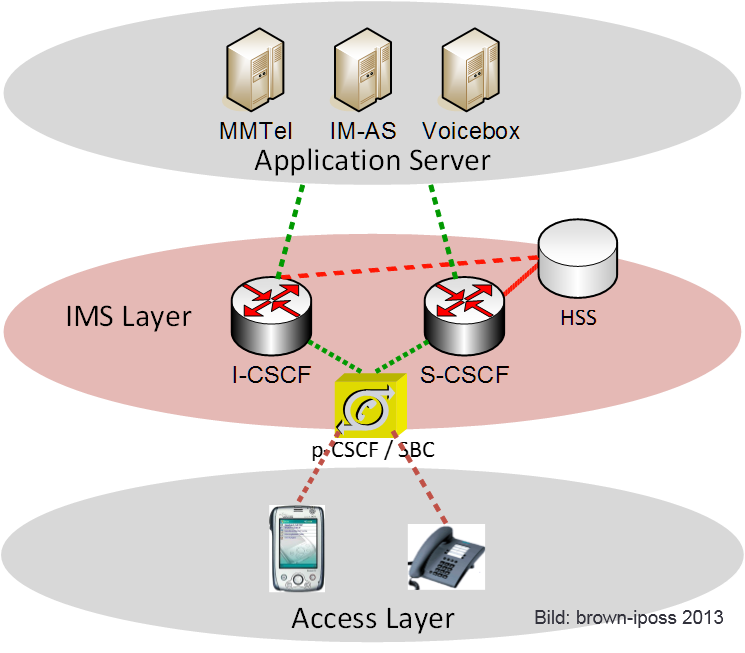 Modern mobile communication systems separate distinguished and bundle similar logical functionality into "layers". By such an approach standardised interfaces can be used and interoperability between system nodes from different vendors can be achieved.

The IP multimedia subsystem is such an approach for fixed and mobile communication networks. Originally introduced by 3GPP it has been adapted widely in the industry. Recent services like Joyn (RCS(e)) or VoLTE (Voice over LTE) are built on top of this architecture. Also fixed-mobile-convergency services like IP-centrex or SIP-trunking are using a common IMS-layer as a foundation.

In contrary to traditional 2G and 3G mobile comunication systems an in-built voice service was not foreseen for the "fourth generation" called LTE (Long Term Evolution). Instead LTE was seen as a completely IP cellular system just for carrying data, and operators would be able to carry voice either by reverting to 2G/3G systems or by using VoIP.

However, the lack of standardisation may provide problems with several scenarios including interoperability with handsets and roaming. Additionally SMS is still a key requirement. SMS is used not only as a simple text message service between humans, it is also frequently used for configuration and M2M applications. This gap is closed by VoLTE, Voice over LTE, which is an IMS-based specification. Therefore several new applications and control server have to be integrated in operator's IMS environment - if already existing.

Since smartphones became more and more popular "over-the-top"-messaging services like What's App are gaining a lot of success. This is challenging traditional messaging systems like SMS and MMS and particulary operator's revenue from these services. As an answer the Rich Communication Services (RCS) program is a global initiative to deploy inter-operator messaging services within an industry ecosystem.

Based on 3GPP specification and marketed by GSMA - the operators alliance behind GSM, UMTS, and LTE - as "Joyn" RCS(e) is a new approach to enable enhanced messaging and voice services based on an IMS infrastructure. Easier interoperability and roaming, integration in handsets and interoperability with VoLTE should convince customers to prefer Joyn instead of competing services from 3rd parties.

Beyond the two "lighthouse" services VoLTE and Joyn for IMS many other topics are considered at mobile and fixed operators stepping to "all-IP"-networks. The new core architecture specified in 3GPP standards proposes to be more "flat" and is shifting a lot of functionality to other nodes. On the radio access network side more intelligence is built in the base stations, called therefore nowadays eNodeB or eNB. On the core side new cmponents are coming in like the evolved packet core (EPC).

Next to the IMS approach the legacy systems and components are still in use and gaining partly even more importance. Due to the lack of the availability of VoLTE until ~2015 voice services in LTE networks has to be ensured by a fallback to 2G or 3G networks, called circuit-switched-fallback (CSFB). Another challenge is the evolution of Intelligent Networks (IN) which are a central part in providing online-charging for prepaid services.

The most important innovations: